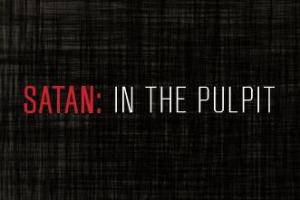 I want you to think of someone in your life that you love with all of your heart. Maybe its a family member such as a parent, sibling, child. or even a spouse.  Lets use the example of a father. Now imagine the unthinkable…that some deranged person took the life of your father in a brutal way. You are devastated. As you grieve, you brother comes over to you and shares in your mourning. But something disturbing catches your eye. As your brother sits beside you crying and angry for what was done to your dad, you notice his t-shirt. It has a picture of the man who murdered your father on the front with a caption that says, “I Support This Man.”

Horrified, you ask your brother just what in the world he thinks he is doing wearing something like that! Your brother, almost offended, looks back at you and says, “Are you implying that I dont love daddy? This shirt has nothing to do with my love for dad….its only a T-shirt!”

In the same manner, we claim to love God with all of our hearts. Yet many Christians support the very things that put Jesus on the cross.

This example is leading into an area of my life that I was really convicted of about three years ago. I claimed to love Jesus and be a devout follower. I read my bible, went to church on Sundays, and even prayed during the week. I didnt deliberately live in sin, and I even taught a Sunday School class. But I loved movies. We had a huge movie DVD library. My favorites were action films like Rambo and especially horror movies.  I couldnt get enough of them. My wife Lacy didnt get into the horror movies as much as she did soap opera’s and reality shows like The Batchelor.

But ever so subtlety, God began to work on our heart. Convicting us, changing us, transforming our thinking.

These are the sins that Jesus had to die for in order that we might be redeemed.  Does this verse mean that if we have ever fallen into one of these sins we can no longer be forgiven? By no means. For the Bible specifically tells us that we all fall short of Gods glory. Those who will suffer separation from God as a result of these sins are those who partake in the deliberately as a practice of life yet at the same time, they know better.

“For if we go on sinning deliberately after receiving the knowledge of the truth, there no longer remains a sacrifice for sins, but a fearful expectation of judgment, and a fury of fire that will consume the adversaries.”Hebrews 10:26.

“Whoever makes a practice of sinning is of the devil, for the devil has been sinning from the beginning. The reason the Son of God appeared was to destroy the works of the devil.” 1 John 3:8.

Although I wasnt deliberately walking in sin or making a practice of sinning, I realized I was enjoying entertainment that seemed to promote these very sins that God seems to hate so much. I remember watching the tv series Friends. And all the sudden it hit me that the whole show was about a group of friends who found enjoyment in breaking Gods laws. The show portrayed sex outside of marriage, drunkenness, and issues like pornography and made these sins against God into very comical situations. I was laughing at the very sins the God destroyed nations for in the Old Testament!

But its only a television show….right?

Then God began to convict me in the area of movies. I loved Rambo! What guy doesnt love movies where stuff gets blown up! But I began to see in these movies that the Lords name was used in vain an awful lot. I never used these word! And I would never use them. But here I was, finding enjoyment, not being offended, when one of the characters of the movie used Gods name in vain. The same went for the horror movies I loved. Some promoted demonism, witch craft, occult magic. Movies like The Ring, The Grudge, and even the ever popular Twilight series. I would never participate in witch craft. Yet here I was being entertained by the kingdom of darkness that Christ spoke against!

“For he has rescued us from the dominion of darkness and brought us into the kingdom of the Son he loves,” Colossians 1:13.

But its only a movie….right?

The music I was listening too was not safe from our convictions either. Most popular music today have very profane lyrics. The artist sing about sex before marriage, adultery, drinking, drug use, and profaning the Lord. Again, I would never partake in any of these sins, but I didnt mind listening to someone else sing praises about them, and do so with a tap in my foot and a smile on my face. The same can be said for books as well. Harry Potter, Twilight, and a few other popular books have captivated reads young and old. In fact, they read these books about witchcraft and the occult more than they do their own Bibles.

But its only a song….right?

And its only a book….right?

I once heard a pastor say, “Take away a mans idol and he’ll fight and defend it will all his might.” Isnt it funny how we will make excuses and defend our right as Christians to partake in worldly entertainment, yet we dont blink an eye when the Lord we profess to love is blasphemed?

Instead, we laugh at the very sins that caused solders beat him, rip the hair from his beard, whip the skin from his back, place thorns in his brow, and nail his hands and feet to the cross. The most brutal death in history was that of the Lord Jesus. It wasnt Pilate that nailed him to the cross. It wasnt Jesus many critics. It was my sins, and the sins of humanity that took his earthly life. Jesus died in our place, for our sins…a perfect sacrifice in every way. Innocent, spotless, blameless, and in the end, guilty. But not for what he had done, but for what we have done. Everytime we seek out entertainment in shows or music that promote things like witchcraft, fornication, sexual immorality, blasphemy, and adultery, we take a front seat to the  reenactment of  Jesus crucifixion, and laugh at the very sins that Jesus took seriously enough to die for.

Satan still preaches sermons even today. Except his pulpit is not in a particular church. The devil’s pulpit is popular media. Satan preaches through the airwaves. He preaches sermons on how cool witchcraft and the occult is through movies like Harry Potter and Twilight. He preaches sermons on the merits of homosexuality through television shows. He preaches messages on all the things that Christ died for and in support of them through pop culture and media. And he continues to soothe our conscious by reassuring us….”Its only harmless entertainment, just relax and watch!” Isnt that the same line he used in the garden on Eve? “Its only a piece of fruit, just take a bite?”

Will watching a secular movie send you to Hell?  No.  And not all secular media is bad. But I do believe that a true follower of Christ will grow in sanctification. I believe that we will be continually convicted of things in our world, and therefore given a chance to repent and grow more into His image. I believe it is very possible for someone to be a Christian, love secular tv and movies, and not really be aware of the fact that they are actually entertaining themselves with the sins that Jesus died for. Thats how deceptive Satan is. But once we realize that our world hates Christ, we begin to read between the lines. Then suddenly, a sick feeling begins to grow in us when we watch a show where Gods name is cursed. Because all of the sudden, its not just a movie anymore. You see the entertainment industry making light of the sacrifice Jesus paid. You see your Lord being mocked by the media. And what was once considered recreational and innocent becomes very personal.

Its hard to laugh at the very things that murdered our savior.

1 Corinthians 10:31 says, “So whether you eat or drink or whatever you do, do it all for the glory of God.”

The verse didnt say do some things for God’s glory. It didnt say do all things for the glory of God except for entertainment. The text reads ALL THING are to be done with Gods glory in mind. The old “WWJD What Would Jesus Do” Bracelets come to mind. Although they could be a bit goofy, the idea behind the bracelets was great. Would Jesus be entertained by reading, watching, or listening to the sins he gave his life to cover? Do people know we are followers of Christ not only by the things we do, but by what we dont do? If we look like the world, smell like the world, and love the same evil things of this world, is the love of Christ truly in us? Whats that old saying….”If it walks like a duck, and quacks like a duck, chances are….IT’S A DUCK!”

We as believers know the difference between right and wrong. We know Gods commandments. And sometimes we pride ourselves on not committing these acts. But the Bible tells us not only is it wrong to commit these acts, but it is wrong to take pleasure or find entertainment in those who do these acts! This post may have stepped on some toes, just as mine we stepped on three years ago. But I profess nothing that is of my own opinion. As Charles Spurgeon once said, ““The Word of God is like a lion. You don’t have to defend a lion. All you have to do is let the lion loose, and the lion will defend itself.” I need not defend this view point….God through scripture speaks for Himself……

“Furthermore, just as they did not think it worthwhile to retain the knowledge of God, so God gave them over to a depraved mind, so that they do what ought not to be done. 29 They have become filled with every kind of wickedness, evil, greed and depravity. They are full of envy, murder, strife, deceit and malice. They are gossips, 30 slanderers, God-haters, insolent, arrogant and boastful; they invent ways of doing evil; they disobey their parents; 31 they have no understanding, no fidelity, no love, no mercy.  Who KNOWING the judgment of God, that they which commit such things are worthy of death, not only do the same, BUT HAVE PLEASURE IN THEM THAT DO THEM.” Romans 1:28-32.