Nailed To The Cross “A Sermon Series at First Baptist” 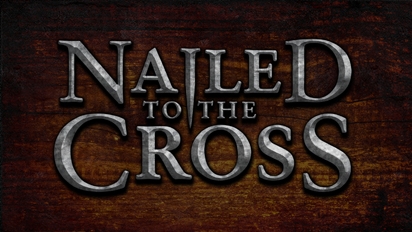 The question is why.

We live in a world riddled with conflict. From broken marriages to crimes against humanity, our culture is screaming for salvation from the trials of everyday life. And when the question of why these things happen cannot be answered, man begins to seek out a solution, or at the very least a temporary fix to ease the hurt. Our world seeks refuge from the pains of life.

The problem is, far too often we end up running to the wrong places. Alcohol, drugs, pornography, food, even relationships appear to be appealing options for deadening these pains of the human heart. But in the end, after the high has worn off, and the person in the relationship has failed in filling our soul, we are left worse off than we began. Still hurting. Still empty. Still seeking answers. Still trying to alleviate our pain.

The question is why. Why do we live in a world where the joys of life can so easily be shattered as quickly as the turning of a page? Why is there so much hurt?

The answer is sin.

God created the world and called it good. It was better than good, it was perfect. When Adam and Eve fell into disobedience in the Garden of Eden, the first original sin fractured the universe as God had created it. And ever since then, the ripple effects of this sin nature has echoed throughout history and into our society today.

We are children of Adam by nature. Fallen and prone to gravitate towards the enticing but fleeting desires of the flesh. The most terrifying thing about God is that He is righteous, He is good, He is perfect, and He is Holy. You may ask, “Why would this be a bad thing?” And the answer is because we are not. So what does a good and perfect God do with a bunch of rebellious sinners like us? Imagine that a man were to murder your family, and he went to stand trial before a judge, only to have the judge declare the man innocent and let him go. Would you consider the judge to be fair and just? Of course not! The crime went unpunished.

So the question we must ask is, “How can a righteous God with with perfect standards let law breakers like us escape punishment and still be considered a God of justice?

The solution is found in the cross of Christ.

“For God has done what the law, weakened by the flesh, could not do. By sending his own Son in the likeness of sinful flesh and for sin, he condemned sin in the flesh, in order that the righteous requirement of the law might be fulfilled in us, who walk not according to the flesh but according to the Spirit.” Romans 8:3-4.

God sent His perfect Son to be the fulfillment of the law that we could not keep, thus meeting His perfect standards and imputing His accomplishment to His adopted children in the flesh. The wrath was satisfied, the punishment atoned for in the cross of Jesus Christ. This is how God remained just and still punished our sin, by placing it upon His Son.

“It was to show his righteousness at the present time, so that he might be just and the justifier of the one who has faith in Jesus.” Romans 3:26.

The cross was not an after thought in regards to mans original sin. Rather, the solution to all of mans pitfalls and trials was foreknown and planned by God long before the first star was hung in the sky. Before the foundation of the world, all that Satan would attempt to destroy, all of the family strife, all of the addiction, all of the sickness and turmoil of the human heart….All of it was on a collision course with the cross.

“This Man, delivered over by the predetermined plan and foreknowledge of God, you nailed to a cross by the hands of godless men and put Him to death.” Acts 2:23.

But the implications and purpose behind the cross go much deeper than just a tree on Calvary. It is not merely the fact that Christ took our sin upon Himself, but that He became our sin on that tree. The full thrust of the wrath of God that was due towards humanity was poured out on the sinless, spotless, Lamb of God. It is not enough to tell the story of the crucifixion. We must understand what it was that was accomplished upon the cross. Imputed righteousness upon the enemies of God. Justification, wherein God the Father would now look upon sinners seeing only the blood of His Son. And regeneration, which is the supernatural workings of God within a man, not just hoping that he will walk different, but causing Him now to walk in His ways. The implications of the cross are far greater than most can imagine.

“For our sake he made him to be sin who knew no sin, so that in him we might become the righteousness of God.” 2 Corinthians 5:21

“Yet he saved them for his name’s sake, that he might make known his mighty power.” Psalm 106:8.

Join us this Sunday, Feb. 15th, at 11 AM at First Baptist Camilla as we begin our new sermon series,

“Nailed To The Cross.”

“I have been crucified with Christ. It is no longer I who live, but Christ who lives in me. And the life I now live in the flesh I live by faith in the Son of God, who loved me and gave himself for me.” Galatians 2:20.