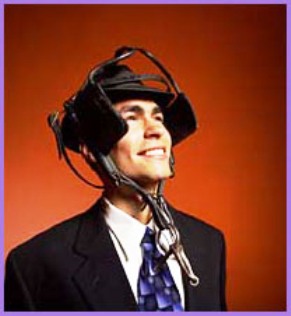 With a family of four small boys, any road trip can and should consist of plenty of movies, (praise God for built-in automobile DVD players), hand-held video games, books, and when all else fails, an arsenal of road games. One of our favorite road games is “I Spy.” This game also provokes many questions from our boys. In looking around outside the car windows, they observe the world around them.

On one of our recent road trips, we drove past a truck hauling a trailer with two horses. The horses had blinders on their eyes, blocking their side view and narrowing the scope of what they could see. In the equestrian world they are called blinkers. On the side of the blinders (or blinkers) was written the name of each horse. Of course, the boys had to know why the horses had on what they called black sunglasses. As best I could, I explained that the blinders are put on the horses to narrow their vision while traveling. Because if they got a full view of what was going on around them, it might freak them out.

It occurred to me in that instance that many professing believers in Christ are the same as these horses. Many Christian live out their spiritual lives with blinders on. Except the names on our blinders are our denominations; Baptist, Presbyterian, Methodist, and so forth.

And my fear is at times, Christians are quicker to label themselves with the denominational tag of their choosing rather than simply a Christ follower. They wear the blinders of denominational status, and refute anything that goes against denominational tradition even if it is Biblical. People choose to wear these denominational blinders not for a lack of Biblical understanding, but rather, some of the truths in scripture freak them out.

There are certain things about God that they don’t like. There are things about God that clash with their personal world view of how things should operate. There are certain things about the character of God that are scary to them. And so, it is much more calming to view God through narrow blinders instead of viewing Him in full range. Because a God in full focus is both awesome and terrifying. Of any being or creature in the scriptures, it is the demons who seem to have the best grasp on God. They don’t view Him with denominational blinders on. They see God in full view.

“You say you have faith, for you believe that there is one God. Good for you! Even the demons believe this, and they tremble in terror.” James 2:19.

So many would say that they believe in Jesus. But James would push to ask, “Is it the God of the Bible you believe? Because the demons believe and tremble in fear at this God!” Proverbs chapter one verse seven says that it is a fear of the Lord that leads to the beginning of truly knowing Him. In Revelation, John writes that in the end times when wicked men see God they will cry out for mountains to fall on them! When Abraham was told by God sacrifice his son Isaac, God stopped Him by saying this;

“And I said: “Woe is me! For I am lost; for I am a man of unclean lips, and I dwell in the midst of a people of unclean lips; for my eyes have seen the King, the LORD of hosts!” Isaiah 6:5.

And these are just a few instances of God’s people throughout scripture having a reverent fear of the Lord. But we don’t see this in our world today. God is more or less viewed as on His knees begging for sinners just come to Him. God is many times viewed a nothing more than a genie in a bottle who exist to give us our best life now. God is more or less viewed as a soft, cuddly, teddy bear for us to run to when we need comfort and toss in the toy box when we decide to play with something else.

When I was a small child, I had sweet, cuddly stuffed shark that I always played with. I thought sharks were sweet little fish in  the sea. I would even brush Frankie’s cotton filled teeth at night (don’t pretend you didn’t name your stuffed animals).  Frankie the shark was not scary. However, a few years later when my dad was flipping through the TV channels and paused on the movie Jaws, I was horrified. Especially when I realized that this was a depiction of what a real shark looked like. Needless to say, my parents never had to worry about me getting in the water at the beach for years!

The terrifying thing about our God is that He is in total control. He is loving, but He is not waiting for acceptance. Jesus Christ is not a pleading beggar, He is a sovereign King! Revelation details a chilling picture of Christ at His return. And my first emotion at reading this description is not comfort, but reverent fear.

“Then I saw heaven opened, and a white horse was standing there. Its rider was named Faithful and True, for he judges fairly and wages a righteous war. His eyes were like flames of fire, and on his head were many crowns. A name was written on him that no one understood except himself. He wore a robe dipped in blood, and his title was the Word of God. The armies of heaven, dressed in the finest of pure white linen, followed him on white horses. From his mouth came a sharp sword to strike down the nations. He will rule them with an iron rod. He will release the fierce wrath of God, the Almighty, like juice flowing from a winepress. On his robe at his thigh was written this title: King of all kings and Lord of all lords.” Revelation 19:11-16.

Why is so much of the evangelical world void of this reverent fear? I believe it is because many have chosen to view Him through blinders. This way, the scary parts of God that we don’t quite understand can be ignored while we narrow our view on to the things that make us feel comfortable. When we wear blinders, we practice religion, not Christianity. When we wear blinders, church tradition and what the culture deems moral becomes God.

And when a person wears blinders, they end up having to perform theological gymnastics so to speak when interpreting scripture. For example, the scriptures will attest to an attribute or a command of God very plainly. However, when a person doesn’t agree or wishes the verse said something else, they will respond most of the time by saying, “Well, what God really meant was…..” As if God didn’t really mean it how He said it! The Bible is clear our God is not a God of confusion. Confusion comes in when we read something in the scriptures we don’t like, and then attempt to alter what is said to make us feel better.  Theological gymnastics are sadly a very common practice.

“The very essence of your words is truth; all your just regulations will stand forever.” Psalm 119:160. “My thoughts are nothing like your thoughts,” says the LORD. “And my ways are far beyond anything you could imagine.” Isaiah 55:8.

Read these two verses together. The very essence of God’s word is truth. God means exactly what He says. There are no loop holes. And God’s thoughts and ways are not our ways. He does not operate and rule over the universe in ways that fallen man would think best. He’s God and we are not. God tells us through scripture that He cannot be contained in a religious box and His ways are far beyond that of human reason!

So when man feels like He has God all figured out and has, in his mind, successfully contextualized the parts of scripture that make Him uncomfortable so that they now jive with his personal world view, the blinders have been put on. The reality is that without blinders, this God of scripture is at times scary. But within the fear, there is a comfort. It is in knowing how helpless we really are that we find a deeper humility and stronger security. In the Chronicles of Narnia, the evil queen and her minions were terrified of the great lion Aslan. You may say, “Of course! They were His enemies!” But those whom Aslan loved and who truly knew him feared the great lion as well. When one of Aslan’s allies asked Mr. Beaver if Aslan was safe, Beaver responded by saying this;

“Safe?” said Mr. Beaver; “don’t you hear what Mrs. Beaver tells you? Who said anything about safe? ‘Course he isn’t safe. But he’s good. He’s the King, I tell you.”

Do you have a reverent fear of God? Or have you molded Him into a nice, neat little cozy image that you can relate to? Does your denomination tradition hold ultimate authority pertaining to your views on God, or do you seek Him in the full context of God’s word? Taking the blinders off is no doubt scary. But once you take Him in, you will discover a much bigger God than you had ever imagined.

“Oh, how great are God’s riches and wisdom and knowledge! How impossible it is for us to understand his decisions and his ways! For who can know the LORD’s thoughts? Who knows enough to give him advice?l And who has given him so much that he needs to pay it back?” Romans 11:33-35.

← Hunger; The Mark of a True Believer
The Importance and Implementation of Family Worship →