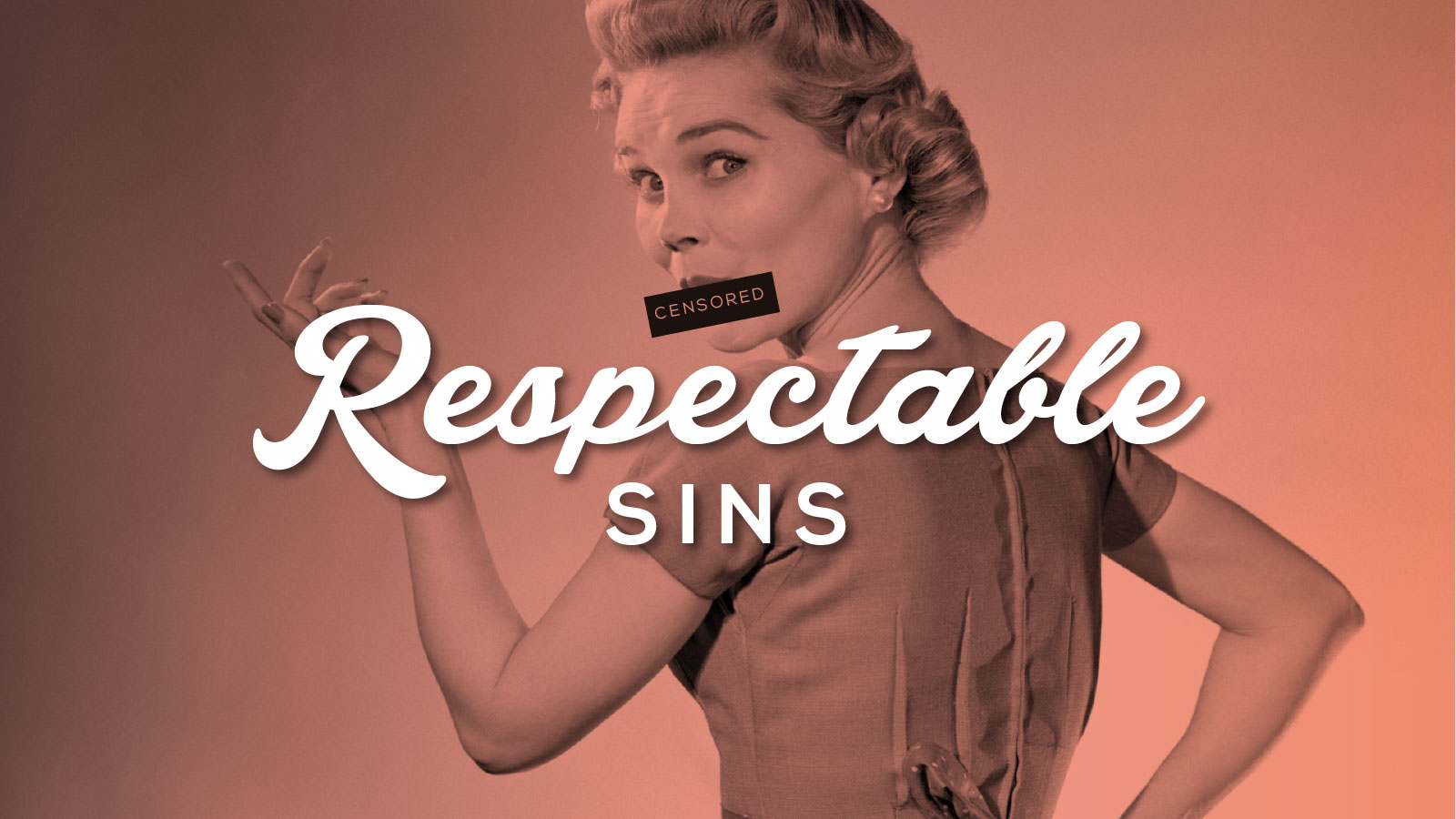 Recently I overheard a conversation between two men. One of the men was  telling the other about a lady who worked in his office that he found very attractive. As he described the lady to his friend, he included a scattering of curse words to add emphasis to his story. Did I forget to mention this man wore a wedding ring?

After he had concluded colorfully describing his lust for a woman who was not his wife, he said in a laughing manner, “The Lord knows I’m not a perfect man, so he’ll just have to forgive my wandering eye and slips of the tongue. Besides Im just a man.” It was as if the man was attempting to cap off his story with justification of his continued actions. It was as if he were saying, “We’re all sinners, so God just needs to accept how I am.”

This post is an extension of last weeks blog entitled “Are You a Good or a Bad Person?” One of the reasons our Christian culture has such a low view of God is because it has a shallow understanding of sin. And in turn, our culture has a shallow view of sin because it also has a low view of God. The lost world is not impacted by the church because a great majority of the modern-day church has no true understanding of the Holiness of God nor the depravity of man.

People have little conscience when it comes to what Jerry Bridges has called respectable sins. A little white lie, the slip of a lustful glance, or the occasional curse word are considered to be every man sins. We pat ourselves on the back for steering clear of what we would consider the big sins such as murder and adultery, and laugh at our affinity for these respectable sins.

As I briefly mentioned in a previous blog, many professing Christians treat certain sins in a tongue in cheek manner because they measure themselves by other people and not by the measuring stick of our perfect God. We look at the man who beats his wife on the five o’clock news or the murderer we read about in the newspaper and we consider ourselves to be good people. But this is a great fallacy.

It’s easy to laugh at sin when we have no understanding of the depths of its offense. It’s easy to justify sins such as lying, cursing, or lusting when we close our eyes to what the Bible says about these things. Truth be told, if a person can flippantly speak of their sin with the proverbial wink of the eye, then they deceive themselves if they claimed to be a Christian.

Am I saying that a person must be without sin to be a Christian? By no means. Unfortunately we all sin, we all fall short. But some will use this statement as an excuse to continue in sin. What I am suggesting is that a person’s attitude towards sin speaks volumes to if they are truly saved. Consider what the scriptures say about our attitudes towards sin.

“No one born of God makes a practice of sinning, for God’s seed abides in him; and he cannot keep on sinning, because he has been born of God. By this it is evident who are the children of God, and who are the children of the devil: whoever does not practice righteousness is not of God, nor is the one who does not love his brother.” 1 John 3:9-10.

John is writing to Christians. And in this context, he says that no one who professes Jesus Christ as Lord makes a practice of sinning. Notice John did not say, “No Christian sins.” He specifically mentioned that no Christian practices sin.

In the same way, a practice of sin is one that we do not avoid. It is to say, “I know that I curse, that I lust, or that I tell little lies, but it’s just who I am.” When we begin to justify what we would consider to be even the smallest of sins, and have no sorrow over them, we have entered into a practice of sin.

The frightening part about this is that John stated in the verse above that no Christian practices sin. No professing believer who truly has the Holy Spirit of God dwelling within them can laugh at their sin. Rather, the true believer mourns over their sinful nature.

“Be wretched and mourn and weep. Let your laughter be turned to mourning and your joy to gloom. Humble yourselves before the Lord, and he will exalt you.” James 4:9-10.

There are far too many professing Christians who take joy in and laugh over their sins. Yet James writes that when it comes to our sins, our attitude should be one of mourning and humility before the Lord. Three of the most popular respectable sins predominantly overlooked by professing believer are lying, lusting, and cursing. And I can already hear some of the objections.

“But the cowardly, the unbelieving, the vile, the murderers, the sexually immoral, those who practice magic arts, the idolaters and all liars-they will be consigned to the fiery lake of burning sulfur. This is the second death.” Revelation 21:8.

The question is not have you ever told a lie, because all of us have. The question we must ask of ourselves is, “Does telling lies…even little white lies…bother me?  And do I desire stop this practice of sin?” In short, are you seeking to repent of even the smallest of transgressions in your life?

Objection # 2; It’s only a lustful glance!

“You have heard that it was said, ‘You shall not commit adultery.’ But I tell you that anyone who looks at a woman lustfully has already committed adultery with her in his heart.” Matthew 5:27-28.

Pretty harsh words from our Lord. The act of adultery is not merely a physical act, but it begins with just a lustful glance. Adultery occurs when the heart begins to lust after someone else other than their spouse. So if just a mere lustful glance can make a person guilty of adultery, then what does God say about adulterers?

“Or do you not know that the unrighteous will not inherit the kingdom of God? Do not be deceived: neither the sexually immoral, nor idolaters, nor adulterers, nor men who practice homosexuality,” 1 Corinthians 6:9.

Again, this list of sins doesn’t mean that anyone who has ever committed these sins is damned. Rather, it speaks to those who will not repent of such sins. They will not turn from these sins. They are entertained by them. They justify these sins. And they practice them.

“If anyone thinks himself to be religious, and yet does not bridle his tongue but deceives his own heart, this man’s religion is worthless.” James 1:26.

Again, it all goes back to repentance. In Mark 1:15 Jesus says that in order for one to be saved they must do two things; Believe and repent. We have no problem with the believe part of that command. However, many neglect to pay heed to adopting the practice of repentance into their lives.  Repentance is a command, but it is also a description of the true Christian.
When salvation occurs, the Holy Spirit comes to dwell within a person giving them new desires. Notably, they begin to hate the sins they once loved and love the righteousness that they once hated. Can a Christian fall into sin? Unfortunately, yes. Can a Christian continue in a practice of sin? Absolutely not. Because their new heart will not allow them too. The Christian mourns over their sin and is ashamed of even what the world would consider to be the most insignificant of sins. The Christian is broken over their sins.
“The sacrifices of God are a broken spirit; a broken and contrite heart, O God, you will not despise.” Psalm 51:17.
Repentance is not only a change of mind, it’s a change of heart. And it is not a one time thing, but rather repentance is now a daily practice of the person who has been made a new creation in Christ. We would do well to do as the apostle Paul had said and to consistantly examine ourselves in light of God’s Word.
“Examine yourselves to see if your faith is genuine. Test yourselves. Surely you know that Jesus Christ is among you; if not, you have failed the test of genuine faith.” 2 Corinthians 13:5.

One sure sign that genuine repentance has and is taking place in the life of a believer is that sanctification will follow. Sanctification, simply defined, is the consistant pattern of growing in Holiness. Sanctification includes the deepening of a persons knowledge of God as well as a knowledge and distain over their sins.
To view any of our sins as small and inconsequential is to belittle the great price the Christ paid for the sins of His people on the cross. It is to make light of the blood of Jesus that was spilled, which was the price that God required for all the white lies, the lustful glances, and the curses that man will flippantly speak. These sins that many deem respectable are so heinous in their offensive to our Holy God, that the penalty for their offense was death.  Christ died in our place, and for our sins. All of our sins. Even the respectable ones.
“For if we go on sinning deliberately after receiving the knowledge of the truth, there no longer remains a sacrifice for sins,” Hebrews 10:26.